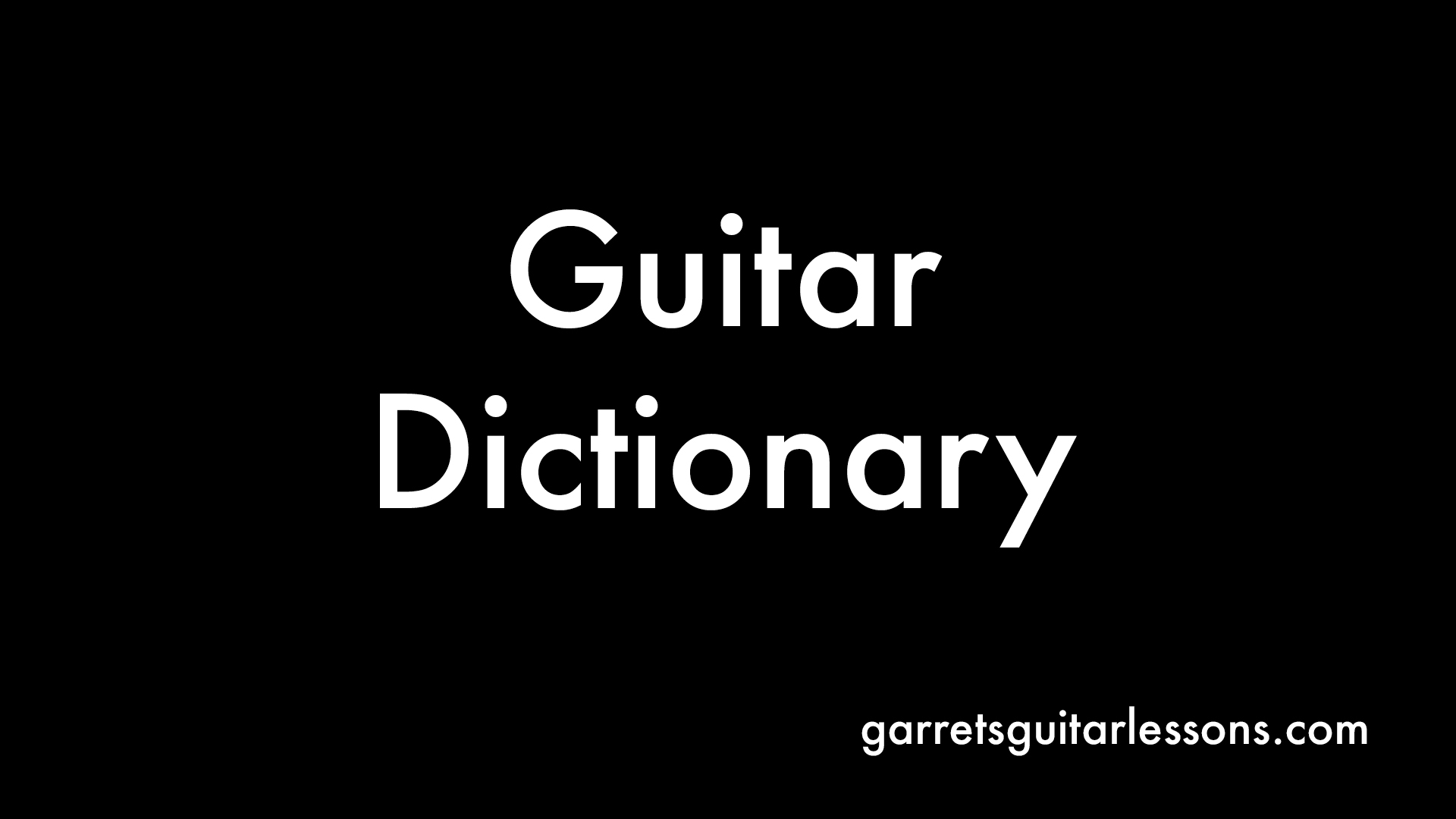 Here’s a list of terms, words and phrases with short definitions. I tried to make this list as thorough and complete as possible but it’s inevitable I forgot some things. So I’ll be adding to this throughout time. If you’d like to know what lesson videos/related blog posts I have about a certain term, use my search bar to the right to find a lesson video for where you’re at in your playing. Or you can go to my Free Lessons page and click on the appropriate tab. I typically have PDF’s, Play Alongs or Backing Tracks that can aid in your learning process as well!

If you have a question or a word suggestion for me to cover here, head over to my Contact page and shoot me a note in the “message” box and I’ll be sure to add it.

5 Chords – Also known as Power Chords – These are chords comprised of two notes, the 1st and the 5th.

Arpeggio – Playing the notes of the chord is succession, much like a scale. It incorporates the same notes as a chord (1-3-5 or 1-b3-5 or 1-3-5-7 or any other chord variation) but instead of strumming the chord, picking each note individually. Typically arpeggios follow the same order of the chord as well. Example: 1-3-5-1-3-5-1-3-5 not 1-5-3-5-1. This is how they’re played normally, not always though.

Barre Chord – A chord that includes no open strings, only fretted notes. Typically including a majority of the strings.
Bending – This is when a string is pulled up or down on the fretboard, changing the initial pitch.

Borrowed Chords – A chord that is borrowed from a closely related key. Closely related to refers to keys close to the original key within the circle of fourths or the major/minor equivilant of the initial key.

Bridge – Typically a part of the song that happens once. Most commonly heard after the second Chorus or Refrain.

CAGED – A visualization tool that organizes the fretboard using barred versions of our open chords: C, A, G, E and D. This is a way to play and visualize chords, arpeggios, scales and modes throughout the neck.

Capo – A guitar gizmo that allows the user to play familiar chord shapes higher on the neck, without having to barre their index finger. This is often used to transpose a song to another key while still maintaining the same playability or chord shapes.

Chord – A group of notes organized by a certain formula. This typically refers to three notes or four note groupings, but can include more notes depending on the extension. A chord is when all the notes are played, picked or strum simultaneously, as opposed to an arpeggio which plays them separately.

Chord Melody – A piece of music that includes both the melody (singing part) and harmony (chords) played at the same time.

Chord Tones – Usually referred to when discussing soloing/lead guitar. This is thinking of the notes in the chords while soloing or playing lead guitar.

Chorus – This refers to the catchiest part of the song. The lyrics tend to be the same in each Chorus and typically has the title of the song within those stated lyrics. Sometimes referred to as “Refrain”.

Chromatic – Notes that either ascend of descend by half steps (one fret), regardless of whether the notes are in the key/scale/chord.

Diatonic – Notes that only follow what’s found in the initial key.

Dominant 7 – A type of chord that is built using this formula (1-3-5-b7). There is only one Dominant 7 chord per key so it tends to ‘dominate’ the key.

Drop D Tuning – This tuning is the same as our Standard Tuning only our low E string (6th string) is tuned down a whole step to a D note. The tuning then becomes (Low to High or 6th string to 1st string) D-A-D-G-B-E.

Economy Picking – Similar to Alternate Picking only always using a down stroke when switching between strings.

Fills – A short melodic line presceeding or at the end of a chord progression or musical bar.

Fingerstyle – Using your fingers to pluck individual strings. This is typically a combination of both finger picking and chord melody (playing both the melody/harmony of a song).

Hammer-ons – Picking a note and playing the next note without picking it, just placing your finger on the desired fret. Always ascending in musical tones (notes).

Half Step – One fret. Can either be ascending one fret or descending one fret. This refers to the actual movement between notes, not the note itself. For example: B is a half step away from C. That movement is called a half step. Notice how it includes two notes (B and C).

Harmonics (Natural) – Notes performed by lightly (and I do mean lightly, hardly touching the string) placing your fingers above the fret (above the actual metal bar). They can be found on the (easiest to hardest frets) 12th, 7th, 5th, 4th, 9th, 3rd and 2 and a half frets. Two and half means between the 2nd and 3rd frets.

Harmonics (Artificial) – A technique to get the same sound of a natural harmonics only with any note.

Harmony – Refers to the underlying chord of a song/melody.

Hook – The catchy part of the song, typically synonymous with the chorus or refrain.

Horizontal Scales – Playing a scale on one string or sometimes a limited amount of strings.

Hybrid Picking – Using your pick and fingers at the same time to either play lead or rhythm guitar.

Interval – The amount of space between 2 notes. Interval exercises are all done diatonic to the scale, but can also be chromatic if a specific interval is described.

Intro – The beginning of a song. Short for “Introduction”.

Inversion – A chord with another chord tone as the lowest note. For example: Major chord is 1-3-5. An inversion would be those same notes in a different order with a different first note: 3-1-5, 3-5-1, 5-1-3, 5-3-1. Can be used with major, minor, 7th chords and extended chords. The example of 1-5-3 would not be an inversion because our first note is still the same.

Key – What scale makes up the notes of the melody/harmony.

Leading Tone – The note a half step before the root note.

Modal – Music that lacks a leading tone to it’s root.

Natural Note – When turning a flat/sharp note back to it’s natural state. Example: Moving an Ab up a half step makes it A (Natural). Typically to clarify what type of A it is, if a different type of A was seen earlier in the song.

Neck – The part of the guitar that has the frets and fretboard on it.

Open Strings – Strings that are played that have no fretted notes or fingers on it.

Outro – The last or ending part of a song.

Palm Muting – A technique in which we use our palm to lightly touch the guitar by the bridge to mute the strings we’re playing.

Parallel Scale – A scale that has different notes, but the same root note. Example: C major and C minor.

Power Chords – Also known as 5 chord – These are chords comprised of two notes, the 1st and the 5th.

Prechorus – The section of the song that is different from the verse, preceding the chorus.

Progression – A group of chords played in a specific order.

Pull-offs – Picking a note and playing the next note without picking it, just placing your finger on the desired fret. Always descending in musical tones (notes).

Refrain – This refers to the catchiest part of the song. The lyrics tend to be the same in each Refrain and typically has the title of the song within those stated lyrics. Sometimes referred to as “Chorus”.

Relative Scale – A scale that has the same notes, but different root note. Example: C major and A minor.

Rhythms – I refer to Strumming Patterns as Rhythms.

Scale – A series of notes, typically 7 notes, in a specific order or sequence. All scales are based around our major scale with altering the notes of the major scale to make up our new one.

Shape – A way to visualize familiar chord/arpeggio/scale forms across the fretboard.

Slash Chord – A type of inversion. The first half of the slash chord is the chord itself, the second half is it’s lowest note. Example: G/B = G chord with the lowest note as a B.

Slides – Using one finger to move between notes, only picking the first note.

Standard Tuning – The tuning that has been standardized on the guitar. This tuning is (Low to High | 6th string to 1st string) E-A-D-G-B-E.

Sus Chord – A type of chord that omits the 3rd and replaces it with either the 2nd or the 4th of the chord.

Tonal – The presense of a leading tone, giving extra emphasis to the intended root note.

Transposing – The ability to move a chord progression, scale, or melody to a different key, utilizing the same numbers to achieve the same order of notes.

Triads – Three note versions of major/minor chords. A Chord essentially is a triad with doublings of either the root (1), 3 or 5. Triads are just the three notes that’s needed to make up a chord.

Verse – A portion of the song that’s lyrics change but structure, harmony and melody stays the same. Often referred to as the A section.

Vibrato – The slight “wiggle” or “wobble” of a note or chord. It’s not so severe that the note actually changes pitches to another note, rather slightly moves away from the initial note for the sound effect.