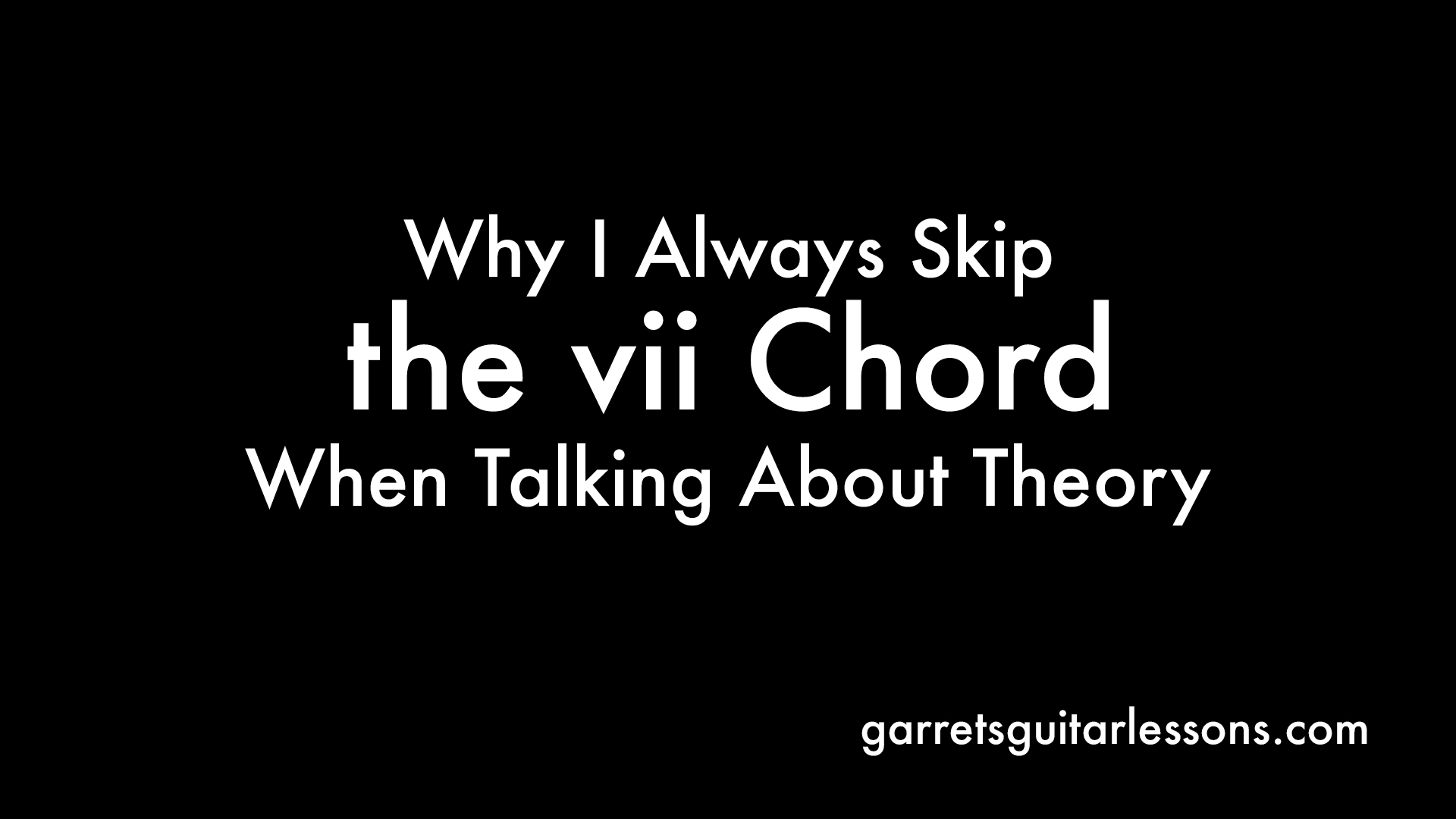 I call my theory video series “Usable Guitar Theory” for a reason. I ignore stuff that may be relevant in a college theory course, but not very applicable to a majority of the music most play. The vii diminished chord is a perfect example of something to ignore when dealing with chord progressions. Here’s my reasoning:

The vii diminished triad and m7b5 as used in # vii of our chord numbers actually functions as an inverted V chord, or a invertered Valt chord. Very rarely, and I mean very rarely do you see the chord actually used as a stand alone vii chord.

So my conclusion was to ignore it while setting up all of my theory lessons.

Does This Mean Diminished Triads, m7b5 and Diminished Chords are useless?

Absolutely not. They are used a lot, in variety of styles, just not as a vii chord. Diminished chords are almost like chameleon chords. They have numerous of different uses, and m7b5, in other situations, are very common. Never have I heard a vii chord actually have a purpose other than what a V7 chord already does. Yet the V7 can be used as a stand alone chord, conforming it’s purpose, a vii chord sounds bad when not serving the function of leading us back to the I. So why spend our valuable brain-cells on something so limited? I argue to ignore it.

Let’s take a look at this in the key of C. Our V7 chord is G7, our vii diminished triad is Bdim, and diminished with a diatonic 7th would be Bm7b5. Here are the notes.

When comparing my G7 to the Bdim triad, we can see the Bdim is just the G7 minus the root (or the G note). “How doesn’t it function as a stand along chord?”. In all the music you listen to, have you ever naturally heard a progression that goes: C – F – Bdim – Am?
Or C – Dm – Bdim – F? I certainly haven’t. Yet replace the Bdim with a G or G7 and you’ll find that everywhere.

How about the Bm7b5 as a vii chord? Nope again. In the key of C, you’ll be hard pressed to find it used in a way that it’s not just functioning as an inverted V7 chord or as a ii in a minor key. When you compare the notes of a Bm7b5 to a G7 chord it just ends up being a G9 without the root.

In fact, Stevie Ray Vaughn used a m7b5 chord as a Dominant 7 without the root all the time. His bass player was playing the Dominant 7 root note and he’d play a m7b5 starting from the 3rd of that chord. It wasn’t part of his song that he used a vii chord, but that chord form added some color to the chord the bass player was implying. This is a great way to utilize this chord, without it sounding very forced.

In a minor ii – V – i, a common chord progression in pop and jazz music, the ii of a minor key is a m7b5 and you’ll hear that quite a bit. A majority of the time the V in that situation can be substituted for a diminished chord as well.

In pop songs, you’ll hear diminished triads and full diminished chords frequently between the IV and V chords and also between the I and ii chords… but rarely as a vii chord.

My whole point is, don’t waste your time thinking about vii chords. 6 chords in a key with all their variations and cool things you can do to those are plenty of chords to wrap your head around. If you get really comfortable with those concepts, adding in the vii for the one out of a million songs that use it will be a breeze to internalize.

*If you look real hard, you’ll probably find a song that utilizes the vii chord as a vii chord. I highly doubt you’ll find one that’s used in a way the Dom7 couldn’t handle it, but I’m sure there are exceptions. I’m speaking in generalities. If you’re taking a theory course in college, remember the vii chord. If you play blues, jazz, rock, funk, country, R&B, pop, hard rock, pyscadelic, rockabilly, folk, indie, ambient, reggae or any other music that people listen to, this lesson should help in understanding what you should spend your time on.